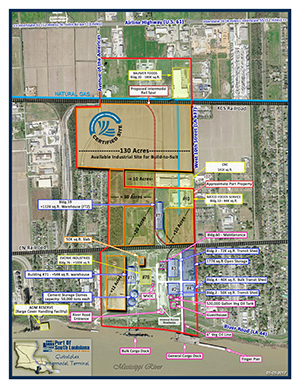 Globalplex Intermodal Terminal is world-class, with storage and warehousing, space for light manufacturing and the most active Foreign Trade Zone…

In the heart of the Port of South Louisiana’s jurisdiction is a 335-acre (135-hectare) MARITIME INDUSTRIAL PARK. The Globalplex Intermodal Terminal is a public terminal -owned by the Port of South Louisiana and operated by ASSOCIATED TERMINALS– for both vessels and barges that provides handling and storage for bulk, breakbulk, and containerized cargos. From Panamax vessels to inland barges, the dock is capable of moving cargo to open or covered storage warehouses, from ship to barge, truck, or intermodal rail transfer. The terminal is served by Canadian National (CN) and Kansas City Southern (KCS) railroads and all major trucking and freight companies. Interstate highway connections are made easily without undue delays. Globalplex is an excellent location for manufacturing, distribution, and logistics companies.

Formerly a sugar refining complex and an integral part of the economic and social history of the region, the Globalplex Intermodal Terminal is a one-of-a-kind public facility on the lower Mississippi River. Its redevelopment is guided by a master plan that focuses on the dynamic needs of today’s shippers and manufacturers. Flexibility, efficiency, and connectivity are the hallmarks of the redesign and new construction.

Globalplex Intermodal Terminal’s deep-draft bulk terminal is dedicated to handling materials including, but not limited to, cement, mineral ores, and woodchips.

The bulk dock is 44′ x 570′ and is equipped with upstream and downstream mooring buoys, allowing dockage of Panamax-class vessels. Bulk handling equipment includes a 1,200 tons-per-hour ship loader, a Manitowoc 4,600 swing crane with hopper, an upgraded bulk commodities conveyor system capable of running up to 2,500 tons-per-hour, and an 800 tons-per-hour Carlsen screw-type unloader for special handling of cement.
The cement facility, which includes dome storage, is one of the largest in the United States. Cargo is quickly moved to and from landside storage via an extensive covered conveyor system.

Globalplex Intermodal Terminal’s 204′ x 660′ deep-draft general cargo dock was developed to handle breakbulk and general cargo. The dock’s circular capacity allows trucks enough area to turn around, which is conducive to maximum transfer efficiency. Adjacent and downriver from the general cargo dock is a 65′ x 700′ finger pier, which allows the berth of two Panamax-size vessels and direct-to barge transloading. Two Konecranes Gottwald portal harbor cranes, which will soon travel the full length of both docks, are in place to handle a wide variety of cargoes, including bulk, containerized, and project cargos.

Also available is a 177,000 square-foot (16,444 square-meter) storage pad, providing ample space for the staging of cargo prior to shipment. There is sufficient turning radius for interstate trucks and stevedoring equipment to maneuver while handling cargo. The area is outfitted with lighting and a rainwater runoff and drainage collection system. This open storage area is supplemented by three transit sheds: (1) 50,000 squarefoot shed, (2) 72,000 square-foot shed with truck bays and rail docks, and (3) 40,000 square-foot dry bulk shed.